2019 SS Development - Behind the scene 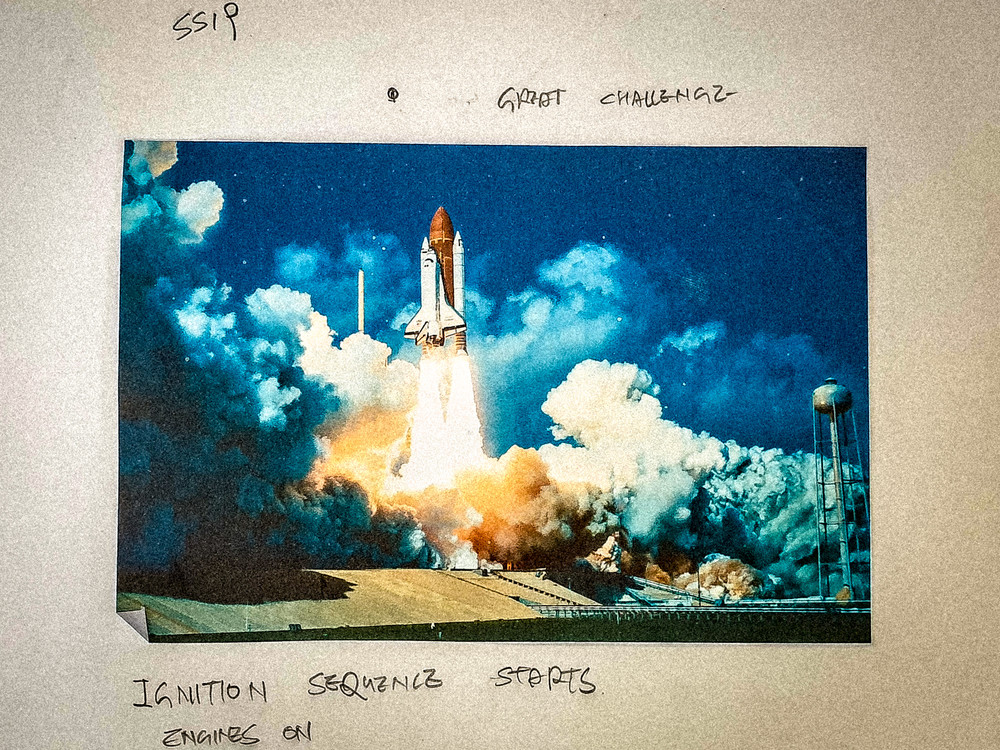 The universe is one of my favourite subjects that I’ve always been very excited about. We talk about light years rather than seconds, minutes or hours. As splendorous an achievement other historical junctures of human history are, the success of humanity’s unyielding fortitude to reach beyond the terrestrial realm of planet Earth is something that remained at the forefront of my mind. I could not help but surrender myself to the feeling of grandeur whilst watching the rocket lift-off of Apollo 8 Saturn V. So, I started to wonder how I could possibly turn this awe-inspiring achievement, into a piece of clothing.

Surely, this was one of the most historical moments that humanity had ever seen. The moment we took that leap and entered the universe, we completed yet another chapter of human history, pushing the bounds of our limit 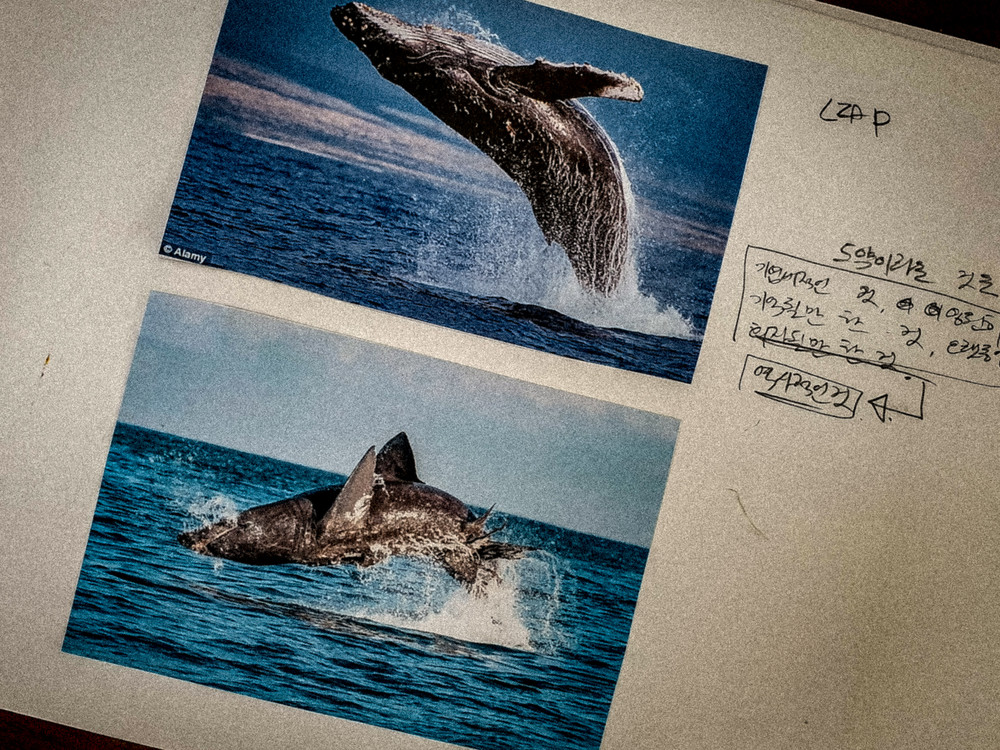 With that determined as the base of the development, I started to explore this further. First, I began by searching for other compellingly monumental achievements in human history.

Firstly, I had to expand upon what it meant to reach beyond the realm of our planet in order to incorporate this inspiration into clothes. There were other incidents that I had found to have differentiated ‘the post’ from ‘the pre’ – the Crucifixion of Jesus Christ, Protestant Reformation, the Industrial Revolution, the United States Declaration of Independence, the Wright brothers, suffragette, etc. Perhaps, those may have not been as much of a significant achievement as sending human beings into space, but I believe we can’t argue that those moments in history did not introduce new eras to humanity for the better. Then, how can we reinterpret those historical moments into clothes? What does it mean to bring about such watersheds?

I began with identity transformation. Like a butterfly breaking open out of a pupa, or a hatching chick out of a shell, there is a fundamental identity change at each of the moments.

What does this mean? What can represent that one short phrase? Whether an abstract occurrence or a physical object, I strived to find something to symbolise it. Having delved into this process over a long period of research, I finally arrived at a conclusion.

A double agent- the one whose job it is to complete a mission under the perfect disguise of darkness. For me, this was the perfect metaphor. However, this concept of mirroring identity transformation of ‘double agent’ to the clothes, was something that I decided to explore further.

The precarious edge between the enemies and allies... The immaculately honed edge of a Samurai sword that finds its way through to determine the death. This edge is where they are for living at their most extreme. This is the tension where they do their utmost under the pressure to hide their real identity. So, I sought to find good references to visualise ‘tension’.

Looking at a room inundated with piles of books on the shelves like these images and a post intertwined with countless wires, I thought this could represent tension in the right way. That was the reason I came up with an idea of adding in darts, to give as a synonymous visual as you can see in the images above. However, I had to undergo a very long process of toile-ing because creating many darts required the removal of the centre back seam in return.

*darts: Darts are folds (tucks coming to a point) that are sewn into fabric to take in ease and provide shape to a garment, especially for a woman's bust. They are used frequently in all types of clothing to tailor the garment to the wearer's shape, or to make an innovative shape in the garment.

*toile : A French word meaning “linen cloth” or “canvas”. Toile is an early version of a finished garment produced using a cheap material so that a design can be tested and perfected.

Flaps and straps were also used to manifest tension. I looked for the association between ‘tension’ and ‘on-alert’ and I found that armour was the perfect medium to communicate this in a dramatic fashion. An armour made to perfection should be without any chinks. ‘Flap’ and ‘strap’ were distinctive design features in bringing this vision of tension to life.

The last design feature to display tension was the tilted centre front.

The reason being that as I was looking at these objects being unstably supported by a wall or other objects, I felt that they are as precarious as a tightrope walker, whose profession should require an enormous amount of tension to be perfectly balanced on rope. This was the tension I had been looking for. Like the energy which is only an inch away from bursting or which is under an infinitesimally fine-tuned alignment in order to maintain the status quo.

With the ‘rocket lift-off’ theme still in mind, I was then able to finalise the process using the colour palette that I had created. 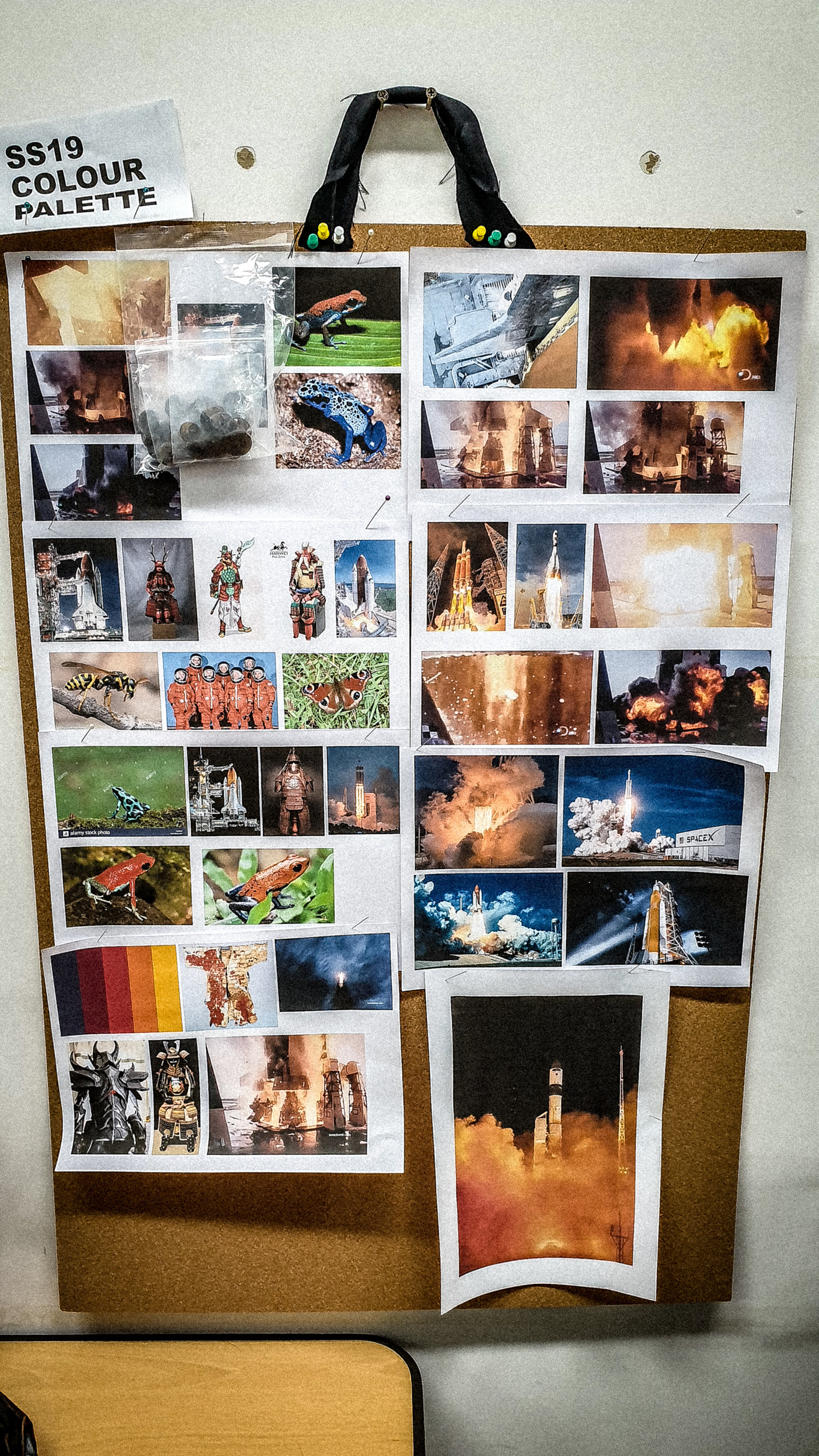 Before signing off, those of you who are reading this rather boring journal of mine, I just want to tell you that it takes quite a long, arduous journey going from the ideation process to the completion of works, as opposed to the perception you might have of a fashion designer. Whilst it may be perceived as fancy to do a creative job as a designer, there are many untold stories behind the scenes. These include the struggles to pushing the boundaries of our limits, having the ears to listen to criticism but also the boldness to stand against it, grit to resist hardship, entrepreneurship and such.

So why did I decide to share this with you? I have taken many risks to get this far (and will continue to), but the element that has led me here is my passion. I have tapped into every bit of what I have to safely and perfectly showcase how I see esopie on every single piece of my clothes- although I did not divulge all the details for the sake of you, the readers. Perhaps, that may have been the reason why I gravitated towards ‘the rocket lift-off’. I couldn’t have found anything better to represent how desperate and determined I am to fulfil this brand's destiny.

I believe that every piece of art should contain a thoroughly developed story behind them, and that if there are people who understand and sympathise with the story, then those pieces are not just drawings, clothes, paintings or sculptures, but they are pulsating stories just under the guise of art. Clothes alone can give an opinion. However, clothes with a story enhance value. Therefore, it’s important for the author to have an interaction with the audience. This breathes life into the clothes and tells a story that the clothes just couldn’t have told themselves. I cannot just say I am such a person who does that, but at least I want to be and will continue to tell my stories for as long as this brand stands in this industry.